Miss Wendy over at the textured leaf sent an award my way. Versatile Blogger Award. There are rules but it's a bit 'chain mail' so I won't be following them. I am supposed to tell you seven things about me so, I will.
It's not something I have been involved in before but I thought it was time I shared some more (obviously you've all been wondering.....:o) and sometimes I don't feel like the real me on this blog. I mean, I'm me, it's just I don't swear, I'm always nicely dressed, I don't squeeze pimples...you get it, I'm like the version of me I probably should try and be all the time.
Reality Bite Number 1:
I spend an inordinate amount of time on this couch. 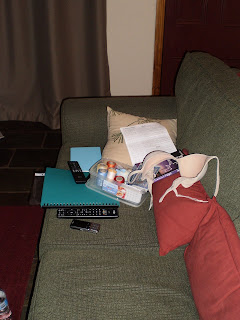 That's my hand sewing but there's no intention of doing any of that tonight. The tv remote - never far away when I'm seated, my phone for texting, a book for during the tv ads, my diary because I left it there the other day and....my bra. Yep, reality is that I randomly take my bra off and leave it where ever. I am wearing a top for those concerned about me getting a cold again.
Reality Bite Number 2:
I don't have a water saver shower head and I don't keep my showers to 4 minutes.
On the other hand, I don't flush very often so I'm saving lots of water there.
It's not gross - there's even a poem about it!
'If it's yellow, let it mellow.
If it's brown, flush it down!'
Reality Bite Number 3:
She spewed on my carpet. 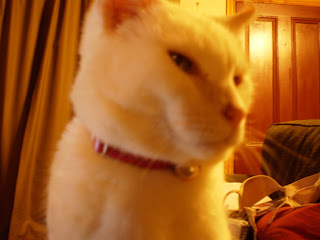 There really isn't that much carpet at my house but that is where she hucked. It's orange. The carpet is not.
Oh look. There's my bra again!
Reality Bite Number 4:
I love to cook but I hate doing dishes. I was a 'dish pig' also known as a kitchen hand, for 3.5 years when I was at school so I believe I've done more than my fair share. I don't have a dishwasher so generally you will find dirty dishes on my sink. I also believe in the drip dry method so there are always either clean or dirty and quite often both.
See I AM a bad kid!
Reality bite Number 5:
My tipple for this evening. It's contains chili so now I am not chilly. 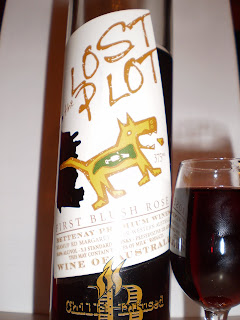 It's not a giant bottle, it's a tiny glass. The winery was called 'Lost the Plot' and is in Margaret River W.A.
There is a whole shelf dedicated to booze in my pantry. I struggle to open 'special' bottles so they will last. Luckily for my liver, there are only 'special' bottles in there.
Reality bite Number 6:
I want to be a lot more productive then I am. I have a huge amount of fabric but I don't delve into it nearly enough. I'm great at starting or even just pondering the uses but I don't get much finished. I really must work on that...
Reality Bite Number 7:
Sometimes real life is hard and sometimes I want to slap sense into people. I mean really, actually slap them. I am judgemental, bitchy, don't shave my legs nearly often enough (poor Mr CP) and I'm stubborn. I let people down. I am late. I am bossy. I whine about my job. I call my cat 'sh1t for brains' just for the fun of it (I say it in a sing song way so she thinks I'm saying something nice) and I still sleep with my teddy. His name is Ted.
On the other hand...I like to do nice things for people when they least expect it (no, not just after I've slapped them!). I love to stop and take a second to look at the stars before heading to work on night shift. I like that some of you think I AM a nice girl that doesn't swear :o) I'm proud of who my dad made me be.
I absolutely love patchwork, fabric, notions and all things quilty.
I am so excited about where this jaunt could lead.
Hope you come along for the ride.
Do any of you hide a little bit of you from Blogland?
Abbe
Posted by Copper Patch at 9:41 PM