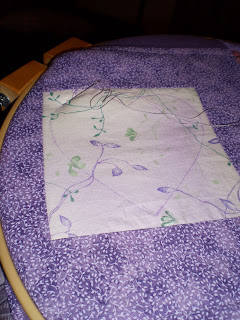 I wouldn't be the first to say that I can't believe it is 2011 already. Where the heck is time going? The months have zoomed by. Maybe it happened when I started counting my time in weeks, scans and how tight my pants had become.
2011 seems to have brought sewing mojo that I am enjoying. I have one more block to quilt on the Purple Wonder - to be attended to straight after I finish this post. A label and it's done. Phew!
The owner to be has just settled on her new house and it is going to look great draped over the couch in her lounge or on the pretty brass bed she bought to celebrate her new surroundings.
I have also started a red and white quilt. Once again I pondered making a Disappearing Nine Patch but I was so taken with the simplicity of the 6.5" blocks that I've decided to save the DNP for another project to be. 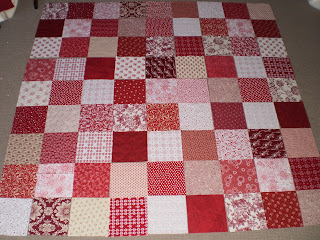 No resolutions for me in the new year. My only plans are to write a list of things I want to make along with a list of projects that I want to complete. Other than that we have to pack and move house, unpack, bring a baby into the world and.....bugger it, that's all that needs to go on the list for 2011.

Happy New Year Sewing Lovelies - It's going to be great!